The Memorial Sloan-Kettering Cancer Center (MSKCC) Leadership Development Program was introduced in 2002 for the purpose of creating the next generation of leadership for the Center. The Human Element is the core of the program and provides the essential principles and tools that drive the learning. The Leadership Development Program has made a measurable impact on the organization. 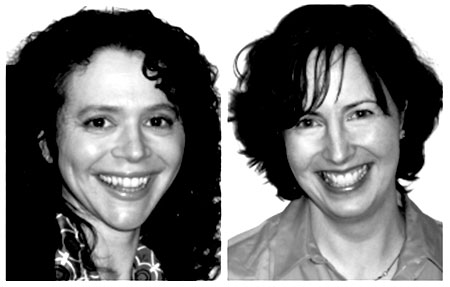 In 1999, Dr. Rony Rinat, Director of Training and Development, observed that several people whom he considered high-potential employees were leaving the organization. Many were next in line for a leadership role that showed no signs of opening up; they saw little opportunity for moving up at the prestigious institution. At the same time, Rinat was beginning to float the idea for an Executive Development Program for MSKCC’s senior leadership. After talking to various senior leaders in theorganization, however, he realized that they would not be the best target for the type of program he had in mind. Vice Presidents and Hospital Administrators of an institution routinely rated the number-one or -two private cancer center in the United States arealready, almost by definition, successful leaders. So Rinat decided to shift his focus and design a program for people who would be in executive positions in five to ten years. Over the course of two years, he met individually with every Medical Chair and Department head in the organization to gain supportfor the new program and to explain its potential. Through his efforts the Leadership Development Program started, and for the first time, medical doctors signed up for developmental training as well as administrators and nurses.

By focusing on the next level of leaders, Rinat envisioned the Leadership Development Program (LDP) fostering positive change throughout the organization in three ways:

Rinat also believed that it would encourage people to stay who were in danger of leaving, for two reasons:

Role of The Human Element

The first year of the LDP used only parts of The Human Element. These were sprinkled into the program and though they had some effect, did not have a lasting impact. The program was successful, but needed to be improved; it did not produce enough self-accountability and awareness in participants.

In the second year, The Human Element became the core of the entire program and served to organize the tools needed for improving leadership capability. In this program and thereafter, a Human Element workshop occupied the first three days of the program. Since the primary tool a leader possesses is his or her own self, the principle of self-awareness, coupled with its related tools of truth and choice, was employed as the focus. The participants were continuously returned to these principles over the course of the two year program. This second program was a tremendous success; participant ratings increased exponentially.

Most participants arrived for the first week expecting to be taught the “perfect leadership model” that they could take back to their departments and implement. One of their biggest surprises was the discovery of how little the facilitators actually toldthem what to do. Instead, they engaged in deep reflection as individuals and membersof a group during the three-day Human Element experience. For the last two days of the first week, they worked on a simulation project. This provided them an opportunity to practice skills in developing understanding and setting direction. By being thrown into an experience with no map other than that which they created for themselves,they began to gain a new understanding of themselves as leaders.

The Principles of Leadership

The program design supports participants in increasing their capacities to carry out four leadership tasks. Three of these were taken from The Deep Blue Sea: Rethinking the Source of Leadership by Wilfred Drath of the Center for Creative Leadership. The forth, the principle of self-awareness, was added from The Human Element:

Based on the principles of adult learning and self-discovery, the LDP provides insight-provoking experiences that offer opportunities for reflection. With a focus on practical application, the program takes place in a variety of settings, with participants learning individually, in small groups, and in a large group.

Leadership Foundations Workshop (offsite) – The Human Element provides the foundation for the entire two-year program by allowing participants to gain awareness at the individual and group levels. At the first gathering, participants engage in three days of The Human Element workshop, followed by two days of a leadership simulation (mock project).

Action Learning Workshop – This workshop revisits The Human Element material from Phase One and adds Human Element team material, Compatibility and Group Stages, in order to focus on understanding the team dynamics and to practice team leadership skills. Using The Human Element Concordance Decision Making method, the group then divides into project teams and chooses Action Learning projects. These new teams meet their project sponsors, receive information on their projects and begin their work.

Action Learning Projects (three and one-half months) – Each team completes an actual MSKCC project (e.g., problem to solve, issue to examine or analyze, plan to implement, process to improve) and presents the results to senior management. A senior manager sponsors each project and provides necessary information and resources. Participants attend monthly sessions while the Action Learning Projects progress, in order to reflect on the learning and gain additional knowledge and resources which support their projects. In addition, a member of the Training and Development Department provides process consultation using Human Element principles, helping team members to understand how the team’s functioning affects its productivity.

Organizational Culture and Change – Participants assess both the organizational culture, as well as the culture of their departments, considering the implications for leading change.

Open Sessions – Participants lead group sessions, including making presentations, facilitating activities or discussions and creating relevant learning experiences for themselves and for the group.

Phase Four: Self as Leader

Multi-Rater Feedback (360° assessment tool) – Participants rate themselves and receive feedback from a variety of people with whom they work about their performance and behavior on the job. Assessment results are provided along with individualized feedback from a multi-rater feedback facilitator. This information serves as the basis for creating an Individual Development Plan or setting goals in developmental coaching.

Individual Leadership Project – Each participant selects a project from his or her immediate work environment to which to apply increasing leadership skills.

Coaching (12 sessions) – Participants engage in a coaching relationship after receiving the multi-rater assessment results and feedback. Additionally, coaches support the participants through the Individual Leadership Projects.

Mentoring (beginning at end of the program for a duration of 12 months) – Each participant chooses a mentor, a senior manager, department or program chair, or program director. Mentors provide participants with different perspectives and help them acquire additional skills or knowledge.

After the beginning of the program in which the core principles, truth, choice and awareness are introduced, each successive part of the program provides more opportunities to practice new ways of doing things. Starting with the relatively safe leadership simulation, and continuing through the action learning projects, individual coaching, and mentoring, the stakes rise continuously. Participants’ actions have progressively greater impact on the organization as they progress through the program. 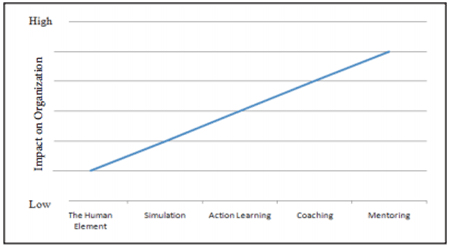 Rinat’s expectation that the LDP would make participants more attractive than external candidates when senior positions opened up has indeed come true for the majority of those in the 2002 and 2005 programs. Sixty-five percent have either garnered promotions or significantly increased responsibilities since they graduated. Many of the others have made positive lateral moves. Kathryn Martin, Senior VP of Hospital Administration, sees this as one of the major benefits of the program. In her words, participants who have completed the program demonstrate:

The LDP has impacted financial matters as well. In 2005, as part of an action learning project to identify opportunities for increased revenue and reduced cost, one team discovered that MSKCC was charging far less for upgrades to private hospital rooms than other hospitals in the city. Once implemented, the team’s recommendation to increase the cost of an upgrade to a comparable rate ended up earning the institution an additional $4.68 million in revenue over the following two years. Another effect of the program, specifically on its prestige, has been to create a general buzz about leadership throughout the organization. Even brand-new supervisors are now asking about the path to the LDP.

Outcomes of the Program

Participant work and recommendations from 2002-2007 resulted in:

Evaluations of the Program Through 2007: 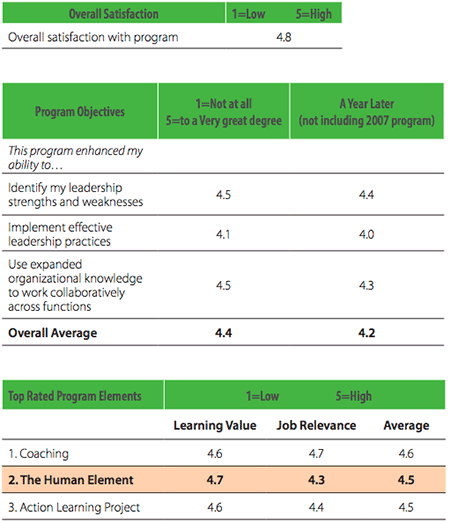 Rinat cites The Human Element as the essential ingredient of the LDP and a key reason for the program’s success and impact. Participants have not only made significant new contributions to the organization and benefitted personally, but have encouraged others to attend, arranged alumni events, and promoted the LDP and The Human Element.

Memorial Sloan-Kettering Cancer Center continues to be the number one or two cancer center in the US and is making progress toward having the next generation of leaders come from within.